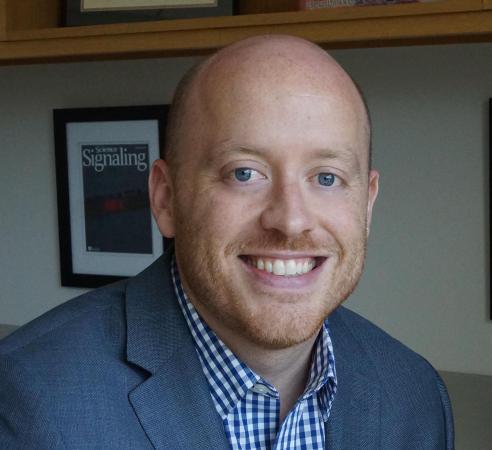 Leukemia starts in cells that would normally develop into different types of blood cells. About 61,000 people in the U.S. are diagnosed each year, and depending on the type of leukemia and the age of the patient, five-year survival rates vary between about 20-80%.

After losing a close friend to an aggressive form of leukemia, acute myeloid leukemia (AML), Kris Wood, PhD, associate professor of pharmacology and cancer biology, devoted his research to helping find better treatment options for people with leukemias and lymphomas. He and his colleagues have discovered a potential new drug therapy that is preparing to enter clinical trials.

A new class of drugs called nuclear exportin inhibitors has recently been approved for use to treat cancers. Nuclear exportins are proteins that shuttle other proteins out of the nucleus of a cell. These new drugs stop the shuttle from leaving the station.

“The idea is that if you treat cells with a drug that blocks a nuclear exportin,” Wood said, “its client proteins become trapped in the nucleus.” And while researchers don’t fully understand why this is therapeutic, it works. Wood and his team investigated the mechanisms behind it. Their results were published in Nature Cancer.

First, they treated AML cells with Selinexor, a nuclear exportin inhibitor. At the same time, they used CRISPR screens to knock out thousands of genes across the genome one at a time to identify genes that made the drug work either much better or much worse when knocked out.

So what happens if you lock the escape hatch?

A class of drugs called AKT inhibitors does just that, and in mouse models, Wood and team found that a combination of Selinexor and an AKT inhibitor work much better than chemotherapy, which is the current standard of care for otherwise healthy patients.

“That’s really exciting to us,” Wood said, “because these drugs have much less toxicity and can potentially be used chronically.” Chemotherapy can only be used for a matter of days before patients have to stop for an extended period of time. If the chemotherapy doesn’t kill all of the cancer in that time, the patient is out of luck. Too much chemotherapy is also lethal.

The new drug therapy comes in pill form, so patients can take it orally, which also helps lower the overall amount of time traveling back and forth to the hospital for treatment.

There is a lot left to discover and test before this could become a new treatment plan for patients, but clinical trials will answer important questions about side effects, how long the drugs can be taken, and how well they work in humans. The hope is for this drug combination to become a bridge to a bone marrow transplant, which is the ultimate cure for leukemia in many patients.

“The problem with AML,” Wood said, “is that doctors struggle to get the leukemia cells under control with chemotherapy. Often they never get to a bone marrow transplant.”

If this treatment can get more people to transplant stage, doctors will be able to save many more lives.